Simplified geologic map of the Raton-Clayton volcanic field (after Luedke and Smith, 1974). 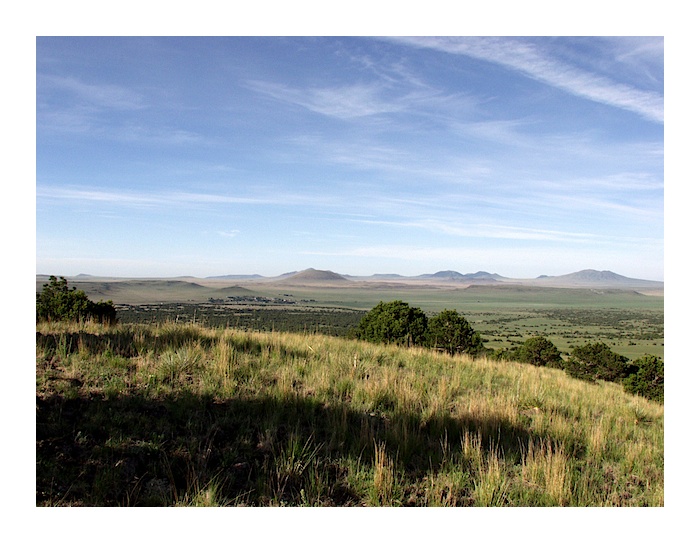 The Raton-Clayton volcanic field (RCVF) is a large, young volcanic field covering nearly 7500 square miles of northeastern New Mexico and adjoining Colorado and Oklahoma. It is the eastern-most young volcanic field in North America. The best-known feature is Capulin volcano, a classic cinder cone volcano that is a National Monument. Capulin was once believed to be as young as 11,000 years old; however, recent geological studies have dated it at 56,000 to 62,000 years. Capulin Mountain is similar in size and morphology to Paricutin volcano, Mexico which erupted in 1943.The RCVF contains well-preserved wheel ruts of the Santa Fe trail and some of the volcanoes were used as markers on the trail.

Volcanic fields differ from the more popular conception of volcanoes, like Hawaii or the large volcanoes of the Cascades. Instead of one big volcano, volcanic fields consist of clusters of many small volcanoes. Overall, they are all characterized by many small centers of eruption (one to a few kilometers across) of fundamentally basaltic, but ranging to more silicic, compositions. Thousands of years may occur between the eruption of each small volcano, but they all occur within the space of a hundred kilometers or so, and contain from several tens of vents to several hundred volcanic vents erupted over a period of several million years. At any one time during the field's active lifetime, this means that it probably looked much as it does today. Each volcano is characterized by low rates of magma eruption and consists mainly of cinders, spatters, and dark lava flows, although other types are present in many fields. The RCVF is mostly small scoria cones and associated lava flows, but there are a few large lava cones, such as Sierra Grande.

The Raton-Clayton Volcanic Field (RCVF) is an example of a large volcanic field. The field covers nearly 7500 square miles of northeastern New Mexico and adjoining Colorado and Oklahoma. The distinctive characteristic of the Raton-Clayton field is its great size, young age, continental interior setting, and possible association with one of the few volcanic hot spots in the world. If you start traveling east, you would not encounter volcanic rocks this young again until the mid-Atlantic ridge. The lava compositions are also somewhat unusual. And it is the site of Capulin volcano, the easternmost young, and easily accessible, volcano in all of North America.

The Raton-Clayton volcanic field is best known to historians as the site of some of the best preserved segments of the Santa Fe trail. Famous landmarks on the trail such as Round Mound, Wagon Mound, and Rabbit Ears Mountains are all volcanic eruption centers. Geographically, the field lies at the northeastern end of what has been called the “Jemez lineament." This alignment of volcanic fields extends from the Pinacate field of Mexico through the Springerville Volcanic Field in eastern Arizona, through the Zuni-Bandera Volcanic Field and the Mount Taylor Volcanic Field near Grants, New Mexico, through the Jemez Volcanic Field and the Cerros del Rio Volcanic Field near Santa Fe, and terminating in the northeastern corner of New Mexico in the Raton-Clayton field. Some studies also include the Taos volcanic field as part of the general trend as well. In fact, the Taos field bears many similarities with the Raton-Clayton field in terms of age, morphology of silicic vents, and compositions. Because the alignment of fields in the Jemez lineament is parallel to the Snake River-Yellowstone volcanic hot spot track, the Jemez Lineament has been considered by some volcanologists to be a type of volcanic “hot spot”. Hot spots are rare, unlike the very common and explosive type of volcanoes like Mount St. Helens. Only 49 volcanic “hot spots” are recognized by volcanologists in the world. A few other famous volcanic hot spots include the Azores, Reunion Island, Iceland, Hawaii, and parts of East Africa. However, there is no age-progression sequence in the eruption of these fields from southwest to northeast and no strong volcanic association in the chemistry or rock-types of all of the fields. Recent research suggests that the alignment is due to preferred eruption of volcanism along an ancient precambrian suture line in the crust, rather than movement of the North American plate over a hot spot in this location.

The oldest rocks range from about 9 million years old, and the youngest erupted as recently as 45,000 years ago. The earliest lavas of the Raton-Clayton field flowed onto the surface of sediment that was eroded from the Sangre de Cristo Mountains. Continued uplift of the general land surface during eruption resulted in the erosion of this surface where it was not capped by volcanic rocks. During subsequent eruptions, lava flowed down valleys cut between the lava capped areas. The result is a series of “inverted topographic valleys” such that the oldest volcanic rocks are now found at the highest elevations above present erosional levels, with younger lavas at progressively lower levels. The most recent volcanic activity occurred at several volcanoes in the center of the field in the vicinity of Capulin Mountain, where lava flows have moved down current drainages.

The Raton-Clayton volcanic field is the easternmost Cenozoic volcanic field in the United States. To the east, Cenozoic volcanic rocks are not encountered at this latitude again until the mid-Atlantic ridge.  As an interesting note, the town of Clayton publicizes the nearby occurrence of Cretaceous-age dinosaur tracks in the sedimentary rocks exposed at Clayton Lake State Park, yet ironically makes no mention of its location near the eastern edge of the easternmost, young, and one of the largest, volcanic fields in the North American continent. 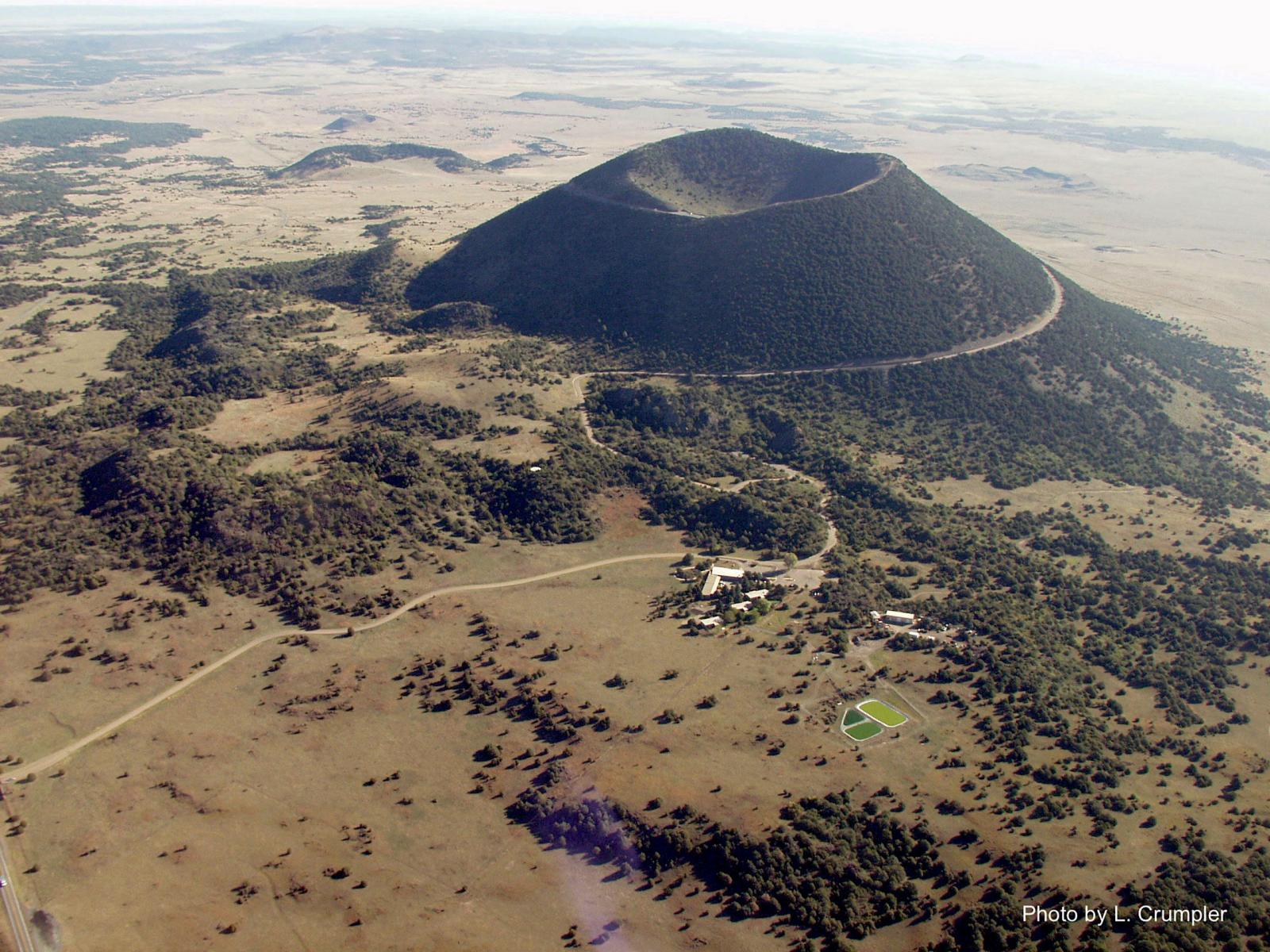 The youngest volcanic activity occurred in the center of the field in the vicinity of Capulin Volcano, the eastern-most young volcano in the United States. Recent work by geologists from the College of Santa Fe, Northern Arizona University, and the Park Service (Sayre et al, 1995; Stroud, 1996), yielded age dates showing that Capulin volcano erupted approximately 56,000 to 62,000 years ago, somewhat older than the initially reported age of ~11,000 years ago. This younger age was based on an assumption that Capulin lava flows were the same age as the nearby Folsom Culture paleosite. Age determinations based on new techniques have now given us more accurate data on Capulin lava flows.

Capulin Mountain is a classic cinder cone with associated small volumes of lava flows. It is similar in size and morphology, and probably eruptive characteristics, to Paricutin volcano, Mexico which erupted in 1943. A detailed study of Capulin (Ort, 1997), indicates that a complicated series of lava flows and cinder/spatter eruptions occurred, during or after the eruption of the cinder cone, in order to build Capulin volcano. Lava flows traveled down what are essentially modern drainages. Three major series of lava flow units occurred, the earliest flowed to the east-southeast of the cone, the second to the west and south, and the third to the west and north. The second and third series of flows erupted from an area at the base of the cone called the boca (mouth) and during these eruptions several intermittent lava lakes formed at the lower flanks of the volcano and portions of the cone were "rafted" away on the surface of the flows. 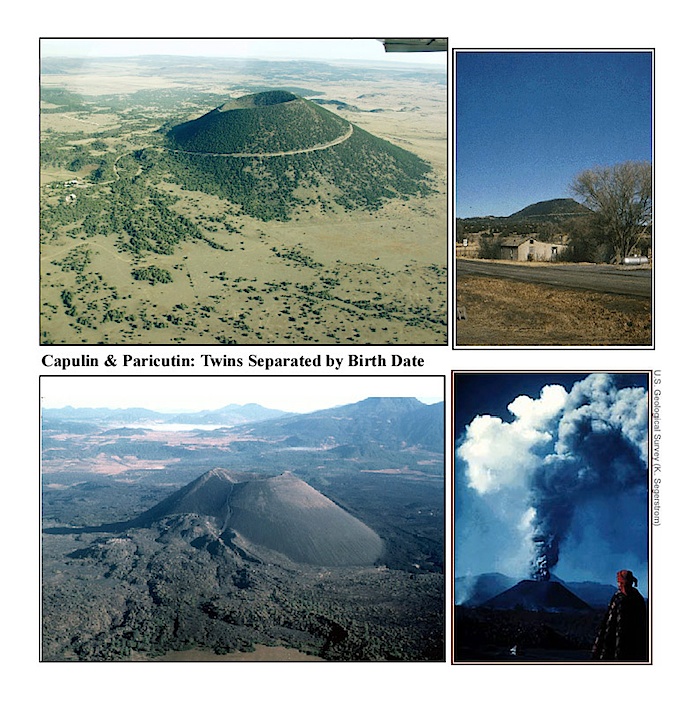 Capulin ( New Mexico) above and Paricutin ( Michoacán, Mexico) below. Volcanoes viewed at comparable profiles and distances.

The similarity between Capulin and Paricutin volcanoes is striking. In addition to the size and general morphology of the cones, both cones developed large “bocas” or flows that emerge from one flank, ramp down from the cone flanks in approximately the same way, and spread lava flows in much the same way. A large lava channel on the Paricutin boca is similar to the channel that today is the picnic area at Capulin. However, Capulin Volcano National Monument was created decades before Paricutin erupted. Paricutin erupted in a Mexican farmer’s cornfield in 1943, approximately 60,000 years after Capulin. 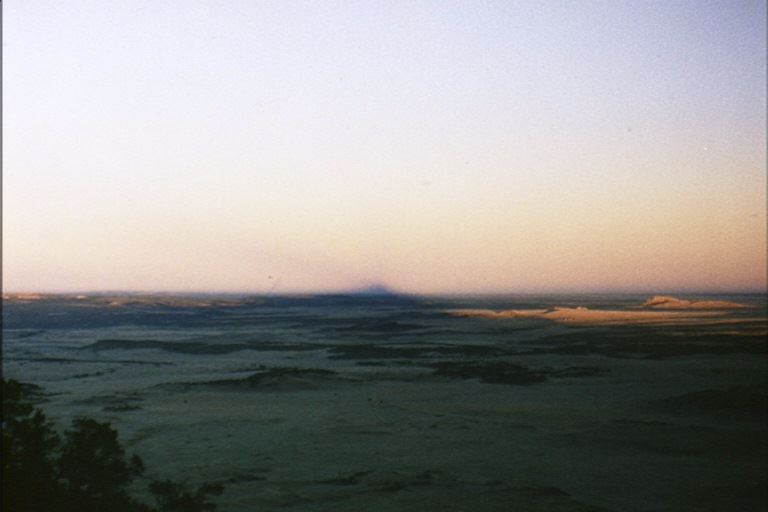 Shadow cast toward the northeast horizon at sunset in January as seen from the summit of Capulin Volcano. Photo, L. Crumpler 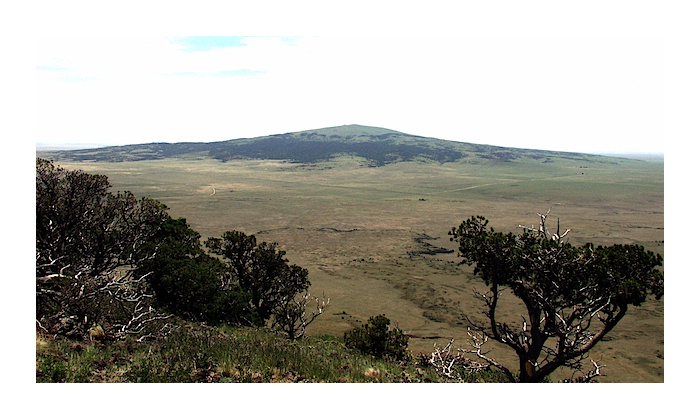 Sierra Grande as seen from a southeast-directed view on the crater rim of Capulin volcano. Photo L. Crumpler

Additional Information about the Raton-Clayton field

The Raton-Clayton field is elongated northwest-southeast, the axis extending from near Trinidad, Colorado to 140 km southeastward near Clayton, New Mexico (Dungan, et al, 1989). Including the outlying parts, the field covers nearly 20,000 km2 (Stormer, 1987; Muehlberger, et al, 1967). The oldest rocks range from about 9 Ma and the youngest erupted less than 60,000 years ago (Sayre et al, 1995; Stroud, 1996). The distinctive characteristic of the Raton-Clayton field is the presence of highly alkalic mafic lavas with SiO2 contents as low as 36%. However, the field also contains centers, such as Sierra Grande, that erupted andesite, dacite or rhyodacite (up to nearly 70% SiO2).

Phases of Volcanic Activity (Stratigraphy) in the Raton-Clayton Volcanic Field

Traditionally the RCVF has been divided into three main phases of volcanic activity (Baldwin and Muehlberger, 1959; Muehlberger, et al, 1967). As a result of recent age radiometric determinations (Stroud, 1996), the ages of these phases are now known to be older than reported in earlier published accounts. Nonetheless, the basic stratigraphy remains adequately defined by three periods. (Note: The following is from Mathis, 1997.)

These are defined in part by a sequence of inverted topography in which the older units are situated on earlier and now higher erosion surfaces, and subsequent eruptions were emplaced on younger and lower surfaces.The earliest lavas of the Raton-Clayton field flowed onto the surface of an alluvial apron of sediment shed eastward from the Sangre de Cristo Mountains (which are located to the west of the field) (Baldwin and Muehlberger, 1959; Dungan, et al, 1989). Continuing uplift during eruption resulted in the erosion of this surface where it was not capped by volcanic rocks. During subsequent eruptions, lava flowed down valleys cut into this surface. The result is a series of "inverted topographic valleys" such that the oldest volcanic rocks are generally found at the highest elevations above present erosional levels, with younger lavas at progressively lower levels and in modern drainages.

The rate of downcutting has been significantly greater in the western part of the field along the head of valleys draining into the Canadian River. The high, lava-capped mesas in the distance to the north are over 700 m above the valley floor. To the east, the elevation of the older basalt-capped mesas decreases, and at Clayton they are only a few meters above the present valley floors.