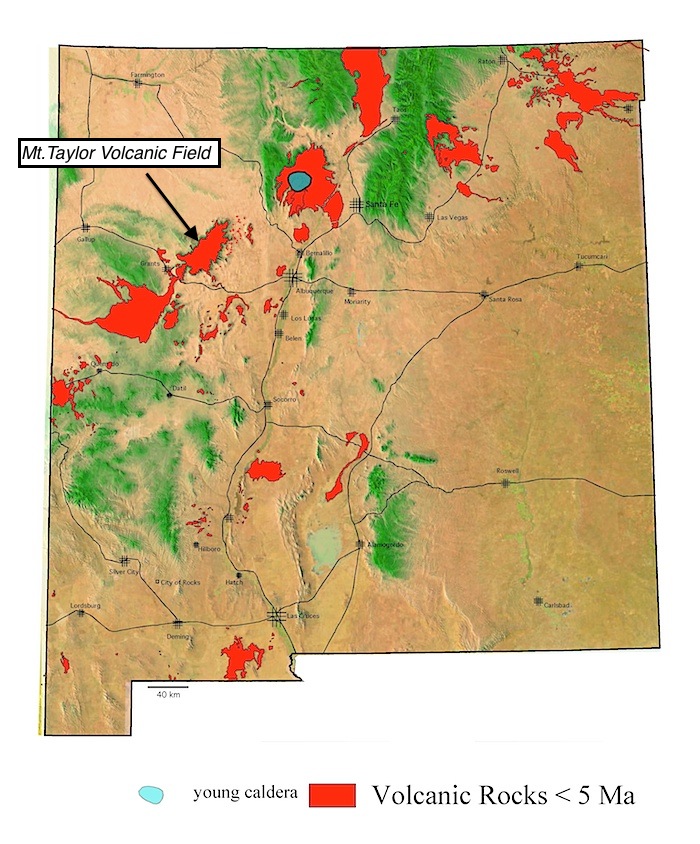 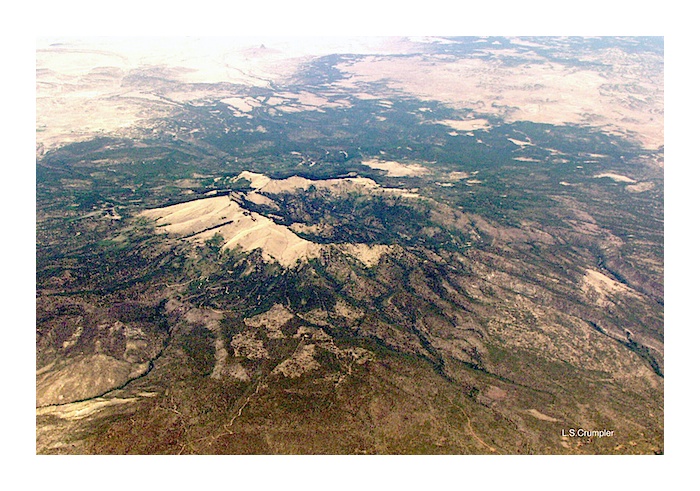 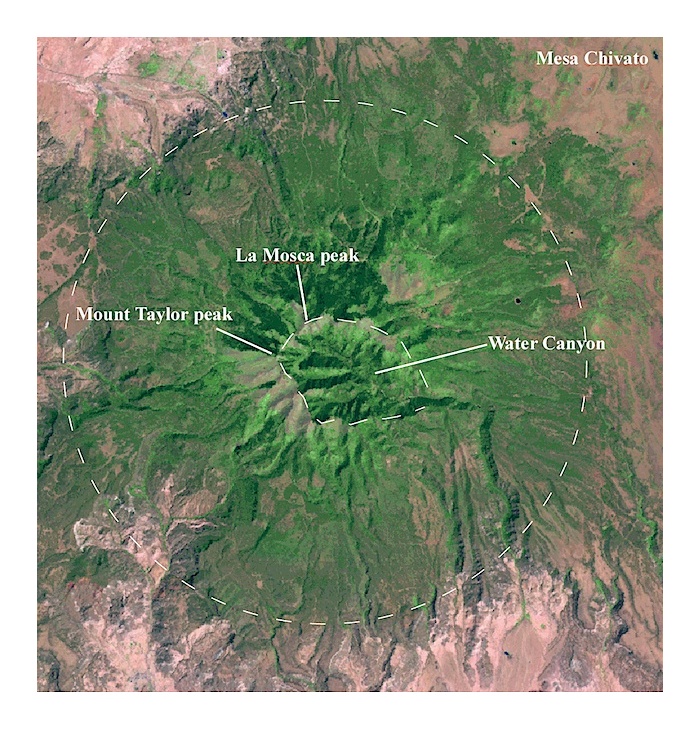 In a Landsat image perspective the radial pattern and summit depression typical of morphologically preserved volcanoes are apparent. 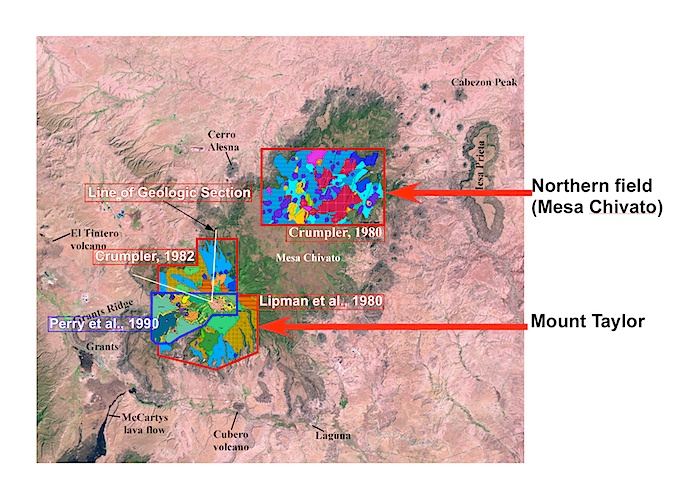 Mount Taylor is typical of many composite cones and consists of a conglomeration of many volcanic centers with many different magma compositions, all more or less clustered around a small area. The large scale symmetry is largely a result of the accumulation of fairly thick and viscous trachydacitic and trachyandesitic lavas later in the history of the volcano and an outward-radiating apron of debris shed off of these domes mixed with late pyroclastic materials.

After the initial rhyolite eruptions, domes and thick viscous flows of trachyandesite and trachydacite began to erupt from various centers. Much of the late history involved emplacement of thick, viscous flows, and debris flows from flow domes of trachydacite near the summit. The more viscous trachydacitic domes tended to be extruded high up on the accumulated volcanic mass. Consequently, their precarious perch on the higher elevations, together with the abundance of snow or water in the upper volcano, led to frequent collapses and avalanching of the hot and/or muddy debris down the flanks of the growing pile of volcanic material. Radial dikes of trachydacite in the summit amphitheater were probably feeder dikes for many of the viscous extrusions. Collapse and extrusion of viscous flows along with occasional basaltic lava flows contributed to the final external accumulations to the volcano. There may have been a recurring pyroclastic cone near the center of this extrusive activity that also contributed to the abundant loose materials that now litter the lower flanks of the volcano with fine light-colored ash and large house-size blocks of trachydacite.The extent to which a summit pyroclastic cone occupied the center of the volcano is undetermined. However, outcrops of intermediate composition ash and scoria on the amphitheater walls suggest that a pyroclastic cone may have occupied the summit originally. Both erosion and late explosive modification could have played a role in the destruction of the summit.

The current morphology of Mount Taylor is that of a truncated cone, centered on a point located at the head of Water Canyon within the large summit amphitheater-shaped valley and just east of Mount Taylor peak and La Mosca peak. This amphitheater has the shape of a large crater, although the relative contributions of erosion versus late-stage (Mount St. Helens-like) lateral collapse are debated. The San Francisco Mountain volcano near Flagstaff Arizona, some 0.5 Ma younger, is probably a good analog for the appearance of Mount Taylor as late as 0.5 to 1 million years ago. There is good evidence that late collapse of the east flank occurred at San Francisco Mountain. A similar event could well have been involved at Mount Taylor volcano.

The original height of the volcano is a question frequently asked by laymen. Estimates of the original height are fraught will all sorts of potential error, largely because of the extreme individuality of most volcanoes. Long-lived volcanoes similar to Mount Taylor experience erosion in many cases that continually worries away the steep and loosely consolidated summits even while the volcano is active. As a result, not all the materials erupted succeed in adding to the summit before limited erosion removes it prior to the next eruption. If the summit pyroclastic cone was well-developed, an original cone topping out at 13,000 to 14,000 feet is within reason. Many cones evolve through several stages of growth and collapse, as well as multiple summits, rather than a single conical mass, resulting in a more rounded and “lumpy” summit. If the near-terminal morphology attained this form, then 12,000 to 13,000 feet, may be a better estimate of the original height. 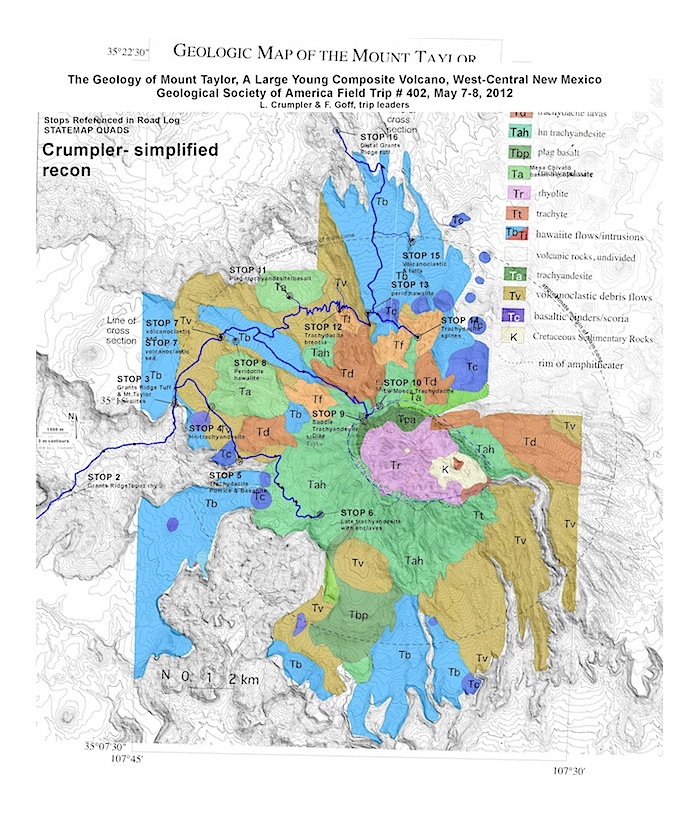 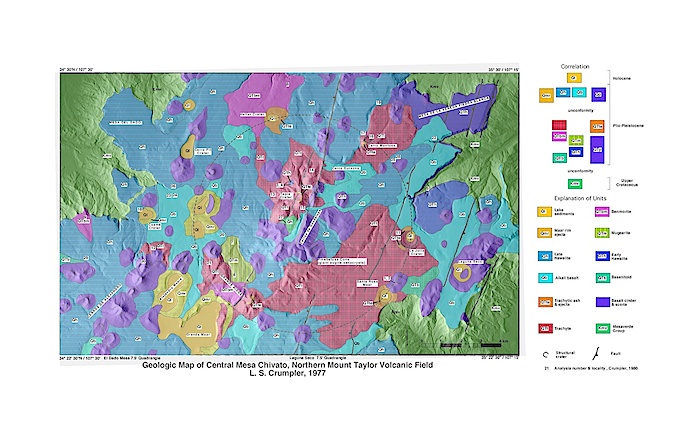 Geologic map of the central Mesa Chivato area of the northern Mount Taylor volcanic field. See map above for location. 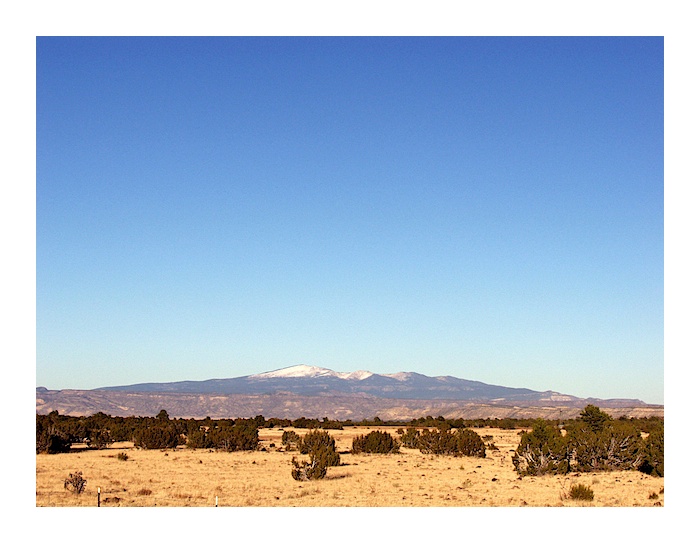 Mount taylor volcano as viewed from NM 53 on the east edge of the Zuni Mountains  Photo L. Crumpler 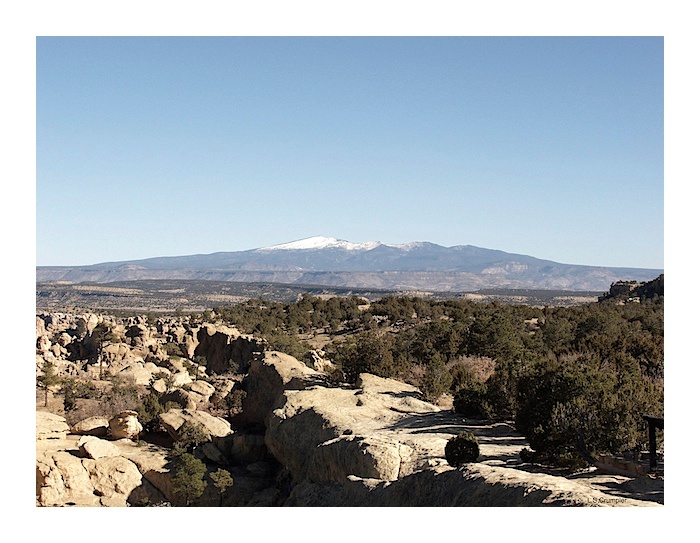 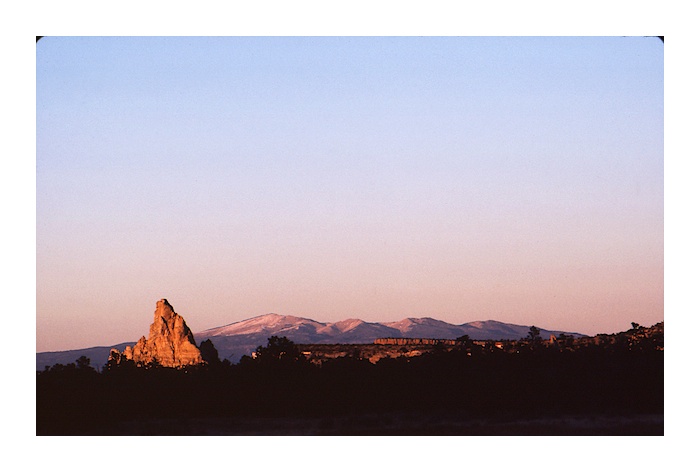 Late sunset lighting of a wintery La Vieja and Mount Taylor as viewed from Highway 117 on the east edge of the El Malpais  Photo L. Crumpler. 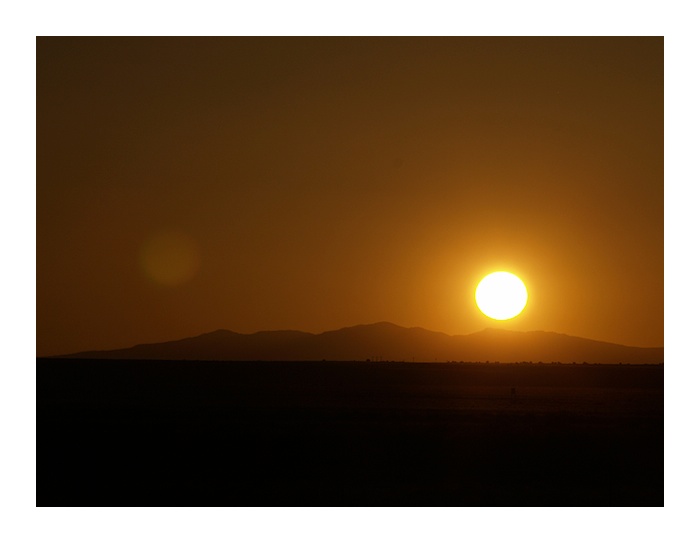 Mount Taylor from the east  The view from the Albuquerque Volcanoes on Albuquerque's west side. Photo L. Crumpler. 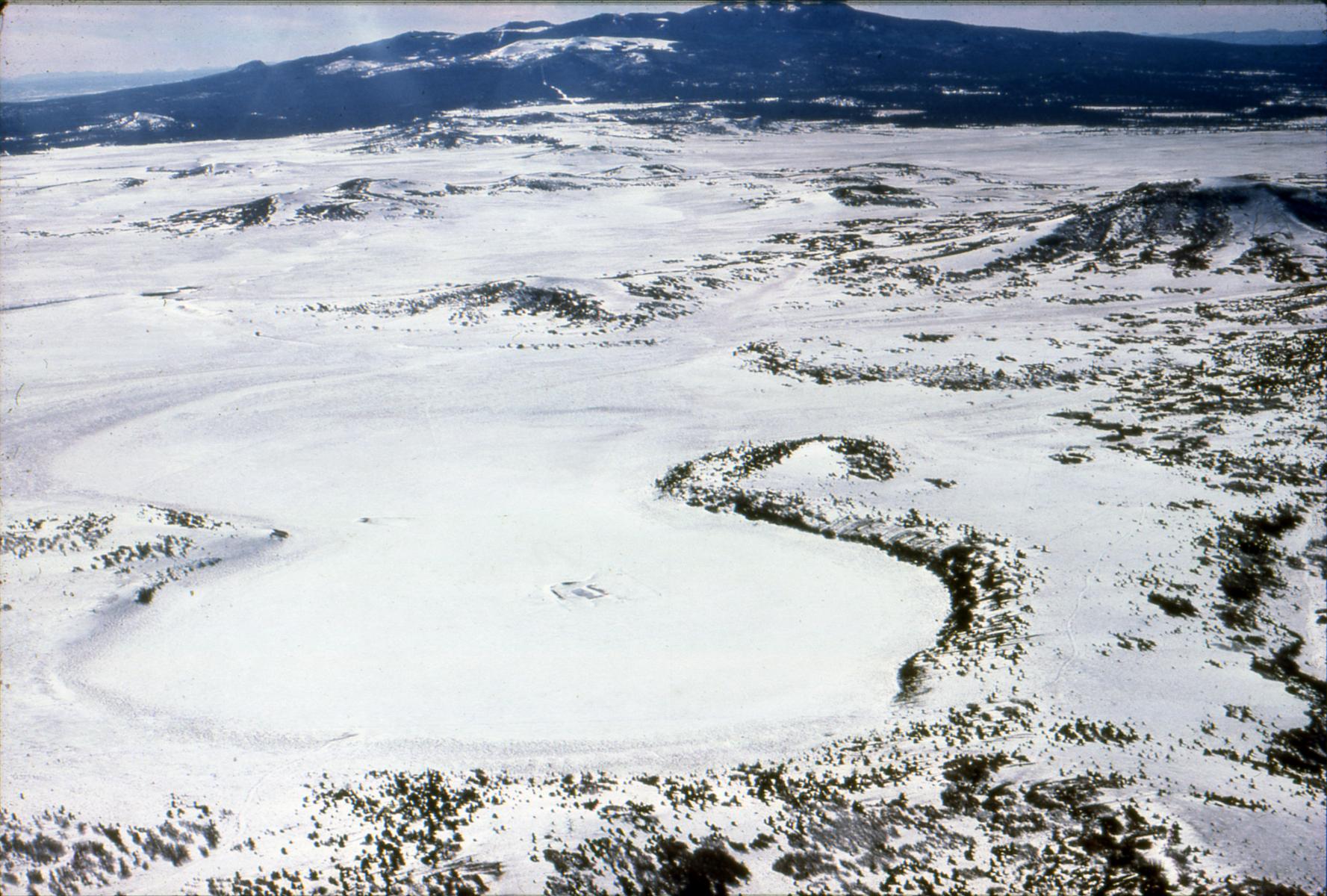 An exceptional number of maars occur in the plateau north of Mount Taylor (Mesa Chivato). These support the idea that conditions were likely much wetter during the lifetime of much of the Mount Taylor volcanic field. Photo by L. Crumpler

View Mt.Taylor in a larger map