The Taos Plateau Volcanic Field is the largest volcanic field within the Rio Grande rift. The field fills the entire Taos basin of the rift, which is bounded on the east side by the Sangre de Cristo Mountains and on the west by the Tusas Mountains. It is unusual for the number of steep-sided volcanic domes and shield volcanoes that are included within the field. The volcanic edifices and lava flows have filled the basin and created a broad valley. Over the past several million years, the Rio Grande has cut down through the extensive layers of lava flows, named the Servilleta basalts, that fill the basin. The river cutting through these layers has formed the Rio Grande Gorge.

Volcanic fields differ from the more popular conception of volcanoes, like Hawaii or the large volcanoes of the Cascades. Instead of one big volcano, volcanic fields consist of clusters of many small volcanoes. Overall, they are all characterized by many small centers of eruption (one to a few kilometers across) of fundamentally basaltic, but ranging to more silicic, compositions. Thousands of years may occur between the eruption of each small volcano, but they all occur within the space of a hundred kilometers or so, and contain from several tens of vents to several hundred volcanic vents erupted over a period of several million years. At any one time during the field's active lifetime, this means that it probably looked much as it does today. Each volcano is characterized by low rates of magma eruption and dark lava flows. The Taos Volcanic Field predominantly consists of steep-sided domical and shield-type volcanoes along with abundant lava flows, although there are some cinder cones.

The Taos Volcanic Field is the largest volcanic field within the Rio Grande rift. It is diverse, both petrologically (rock type) and volcanologically (volcanic edifice), including rock compositions from tholeiite to rhyolite and vent morphologies (volcano type) ranging from cinder cones to steep-sided domical volcanoes to shield volcanoes. The field covers over 7,000 km2 and has formed the broad valley floor by filling the rift basin with volcanic lava flows. The Rio Grande cuts through the extensive sheets of thick lavas, the Servilleta basalts, to form the Rio Grande Gorge. The rift basin (and the field within it) are bounded on the east side by the Sangre de Cristo Mountains and on the west by the Tusas Mountains. On the north the field extends to near the Colorado border and on the south it ends within the narrow constriction between the Taos basin and the Espanola basin. 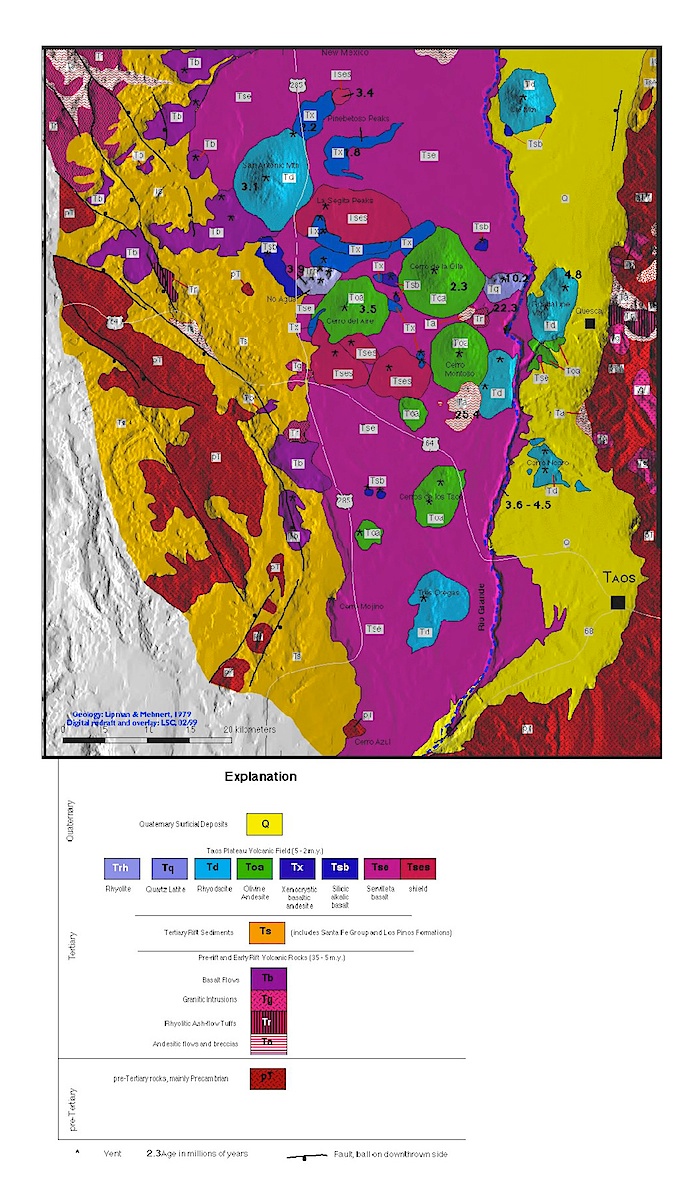 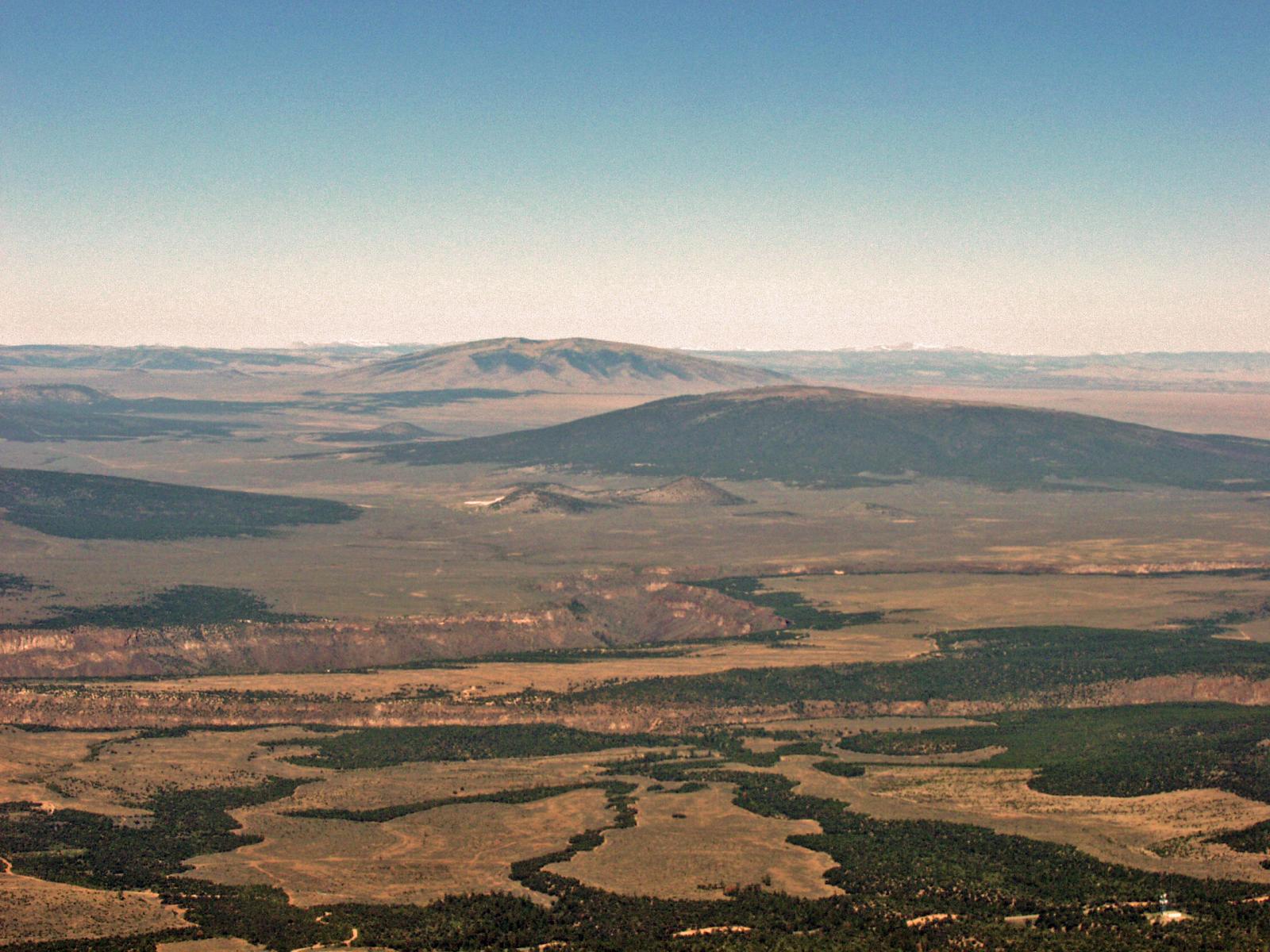 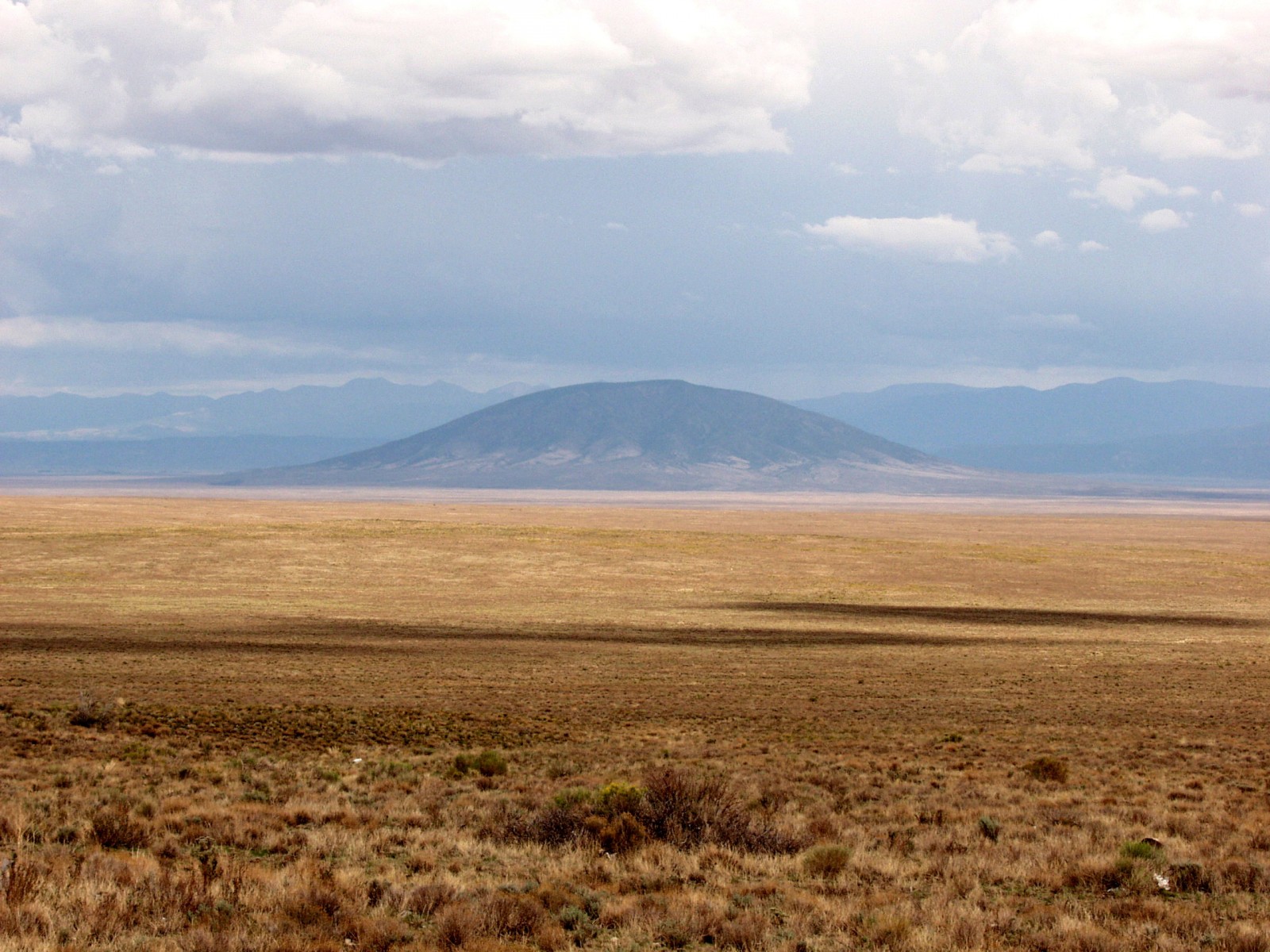 View eastward from the base of San Antonio volcano across the Taos Plateau floor to Ute Mountain volcano.  The Sangre de Cristo range is in the distance behind Ute Mountain. Photo L. Crumpler 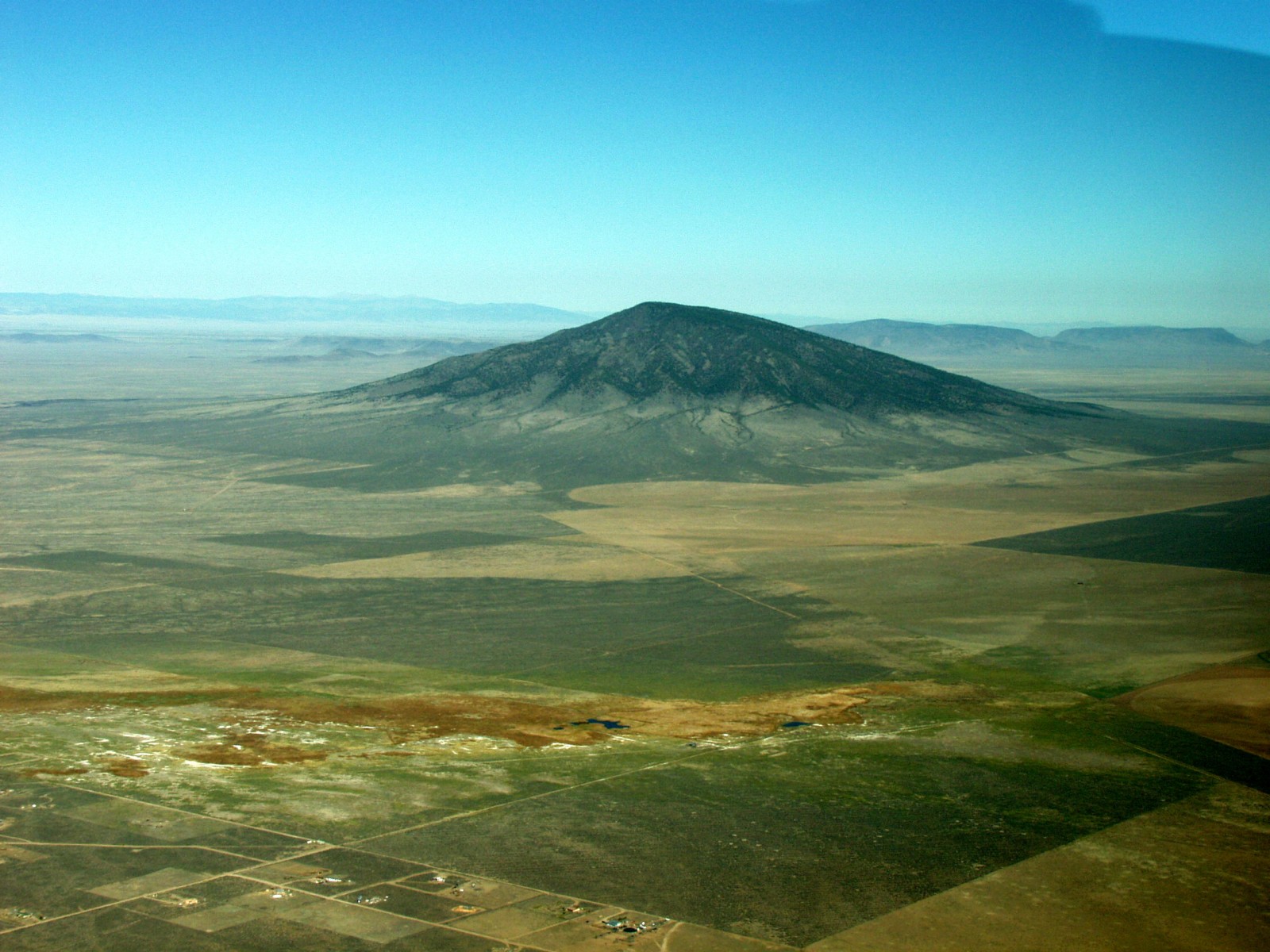 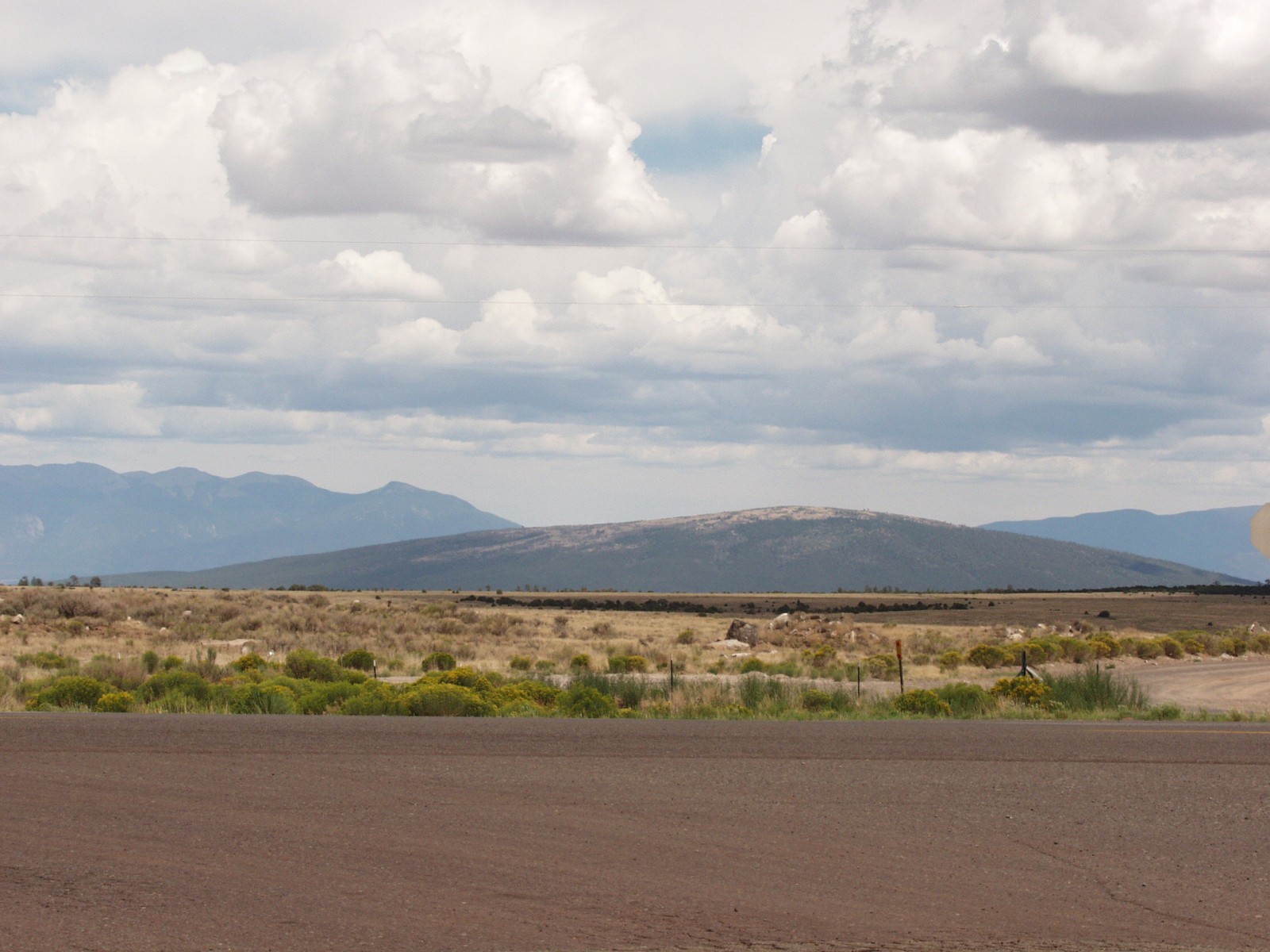 Cerro de la Olla, an elongate andesitic shield volcano in the central Taos Plateau Volcanic Field. This view is toward the east from Highway 285 just north of Tres Piedras. The Sangre de Cristo range at Taos lies in the distance. Photo L. Crumpler

Two lava flow units exposed in a road cut on the north side of highway 285 near San Antonio volcano. This road cut exposes a lower lava flow resting on baked ash. A long period of erosion after the eruption of the lower lava flow resulted in soil development on top of this lava flow and created a significant unconformity (a leap in time) between the lower and upper lava flows. The upper lava flow is interpreted to be a xenocrystic (containing large mineral crystals picked up from other rocks) basalt dated at 2.4 Ma (million years old). The lower lava flow is interpreted to be the 3.82 Ma Servilleta basalt (part of the basalt sequence cut by the Rio Grande to form the gorge). If these identifications are correct, then nearly 1.5 million years separated the eruption of the two flows. Photo L. Crumpler 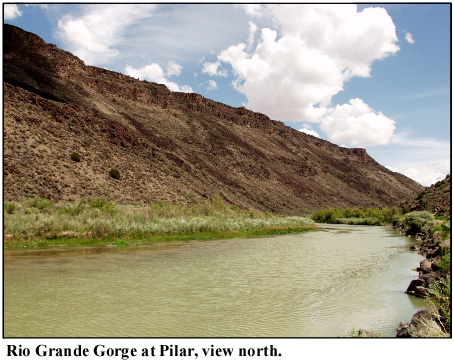 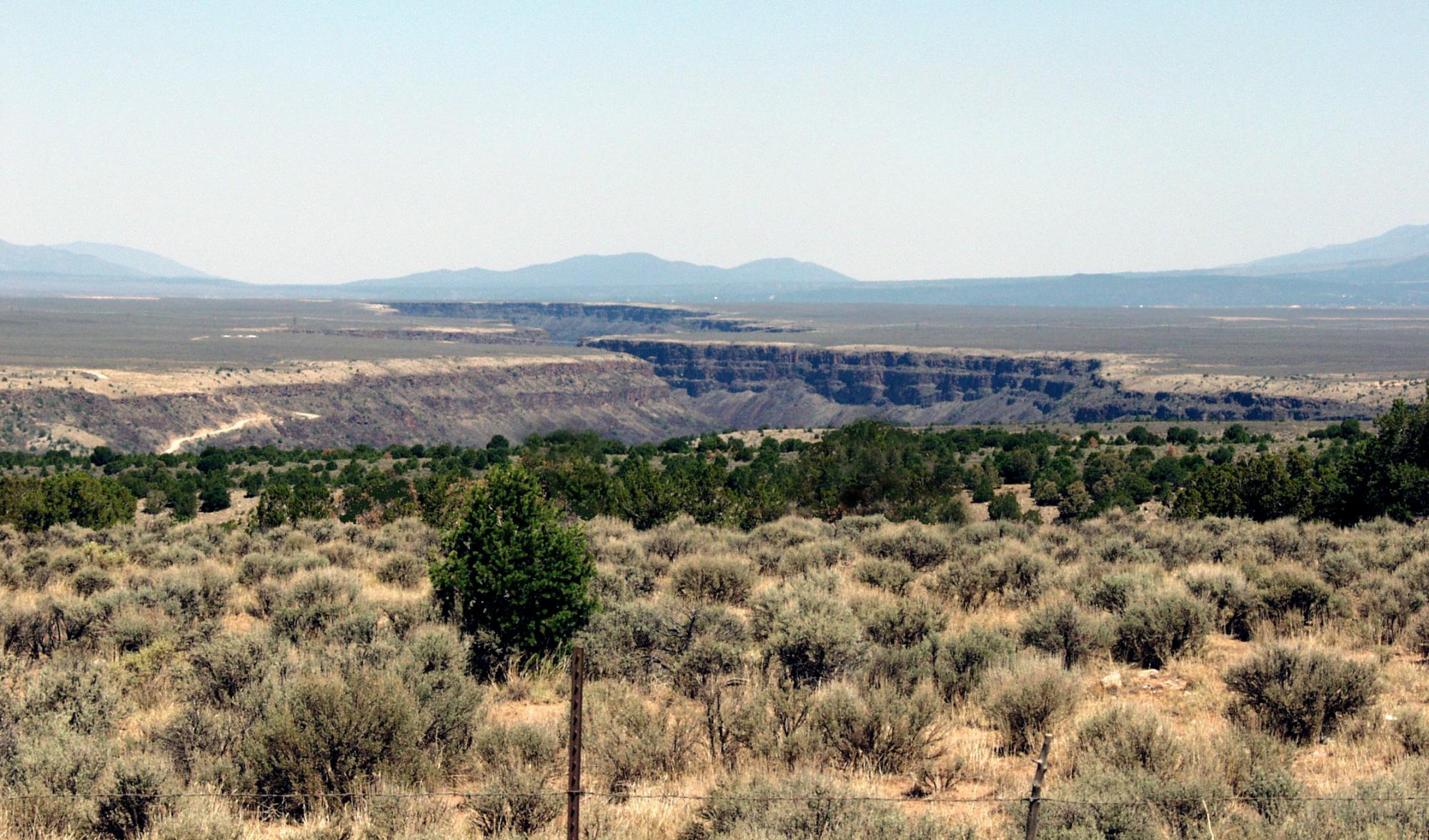 The classic "artist view" of the Taos Gorge. The hills in the distance are individual volcanoes of the Taos Plateau field. The Rio Grande Gorge is frequently confused with the Rio Grande rift. The rift is the entire valley filled with volcanoes and volcanic lava flows. The gorge is a feature within the rift. It was formed by the river cutting down through the basalt flows that filled the rift. Photo L. Crumpler 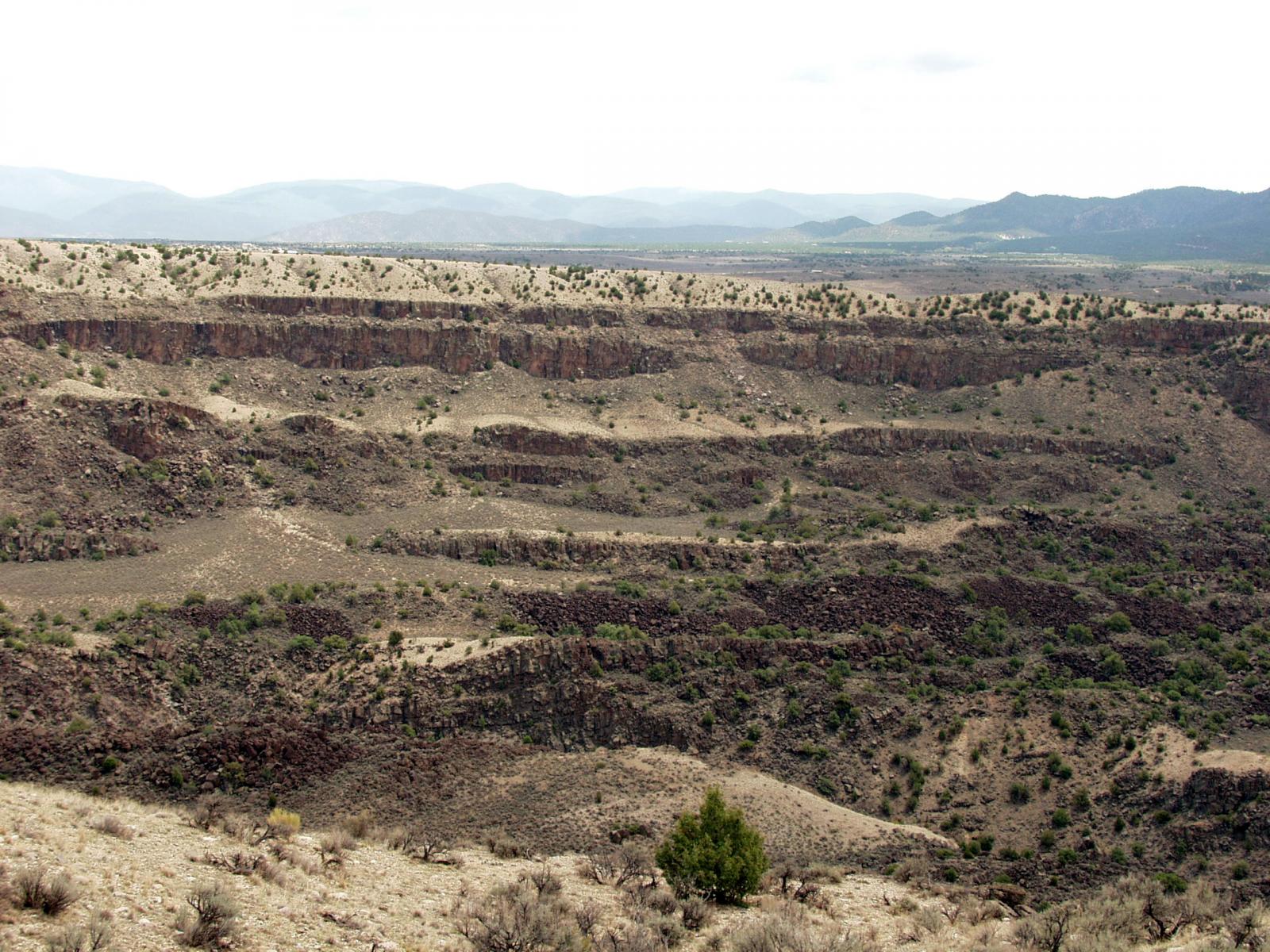 View across the Rio Grande Gorge south of Taos from the western rim. Complex slumping has created a series of terraces. Photo L. Crumpler