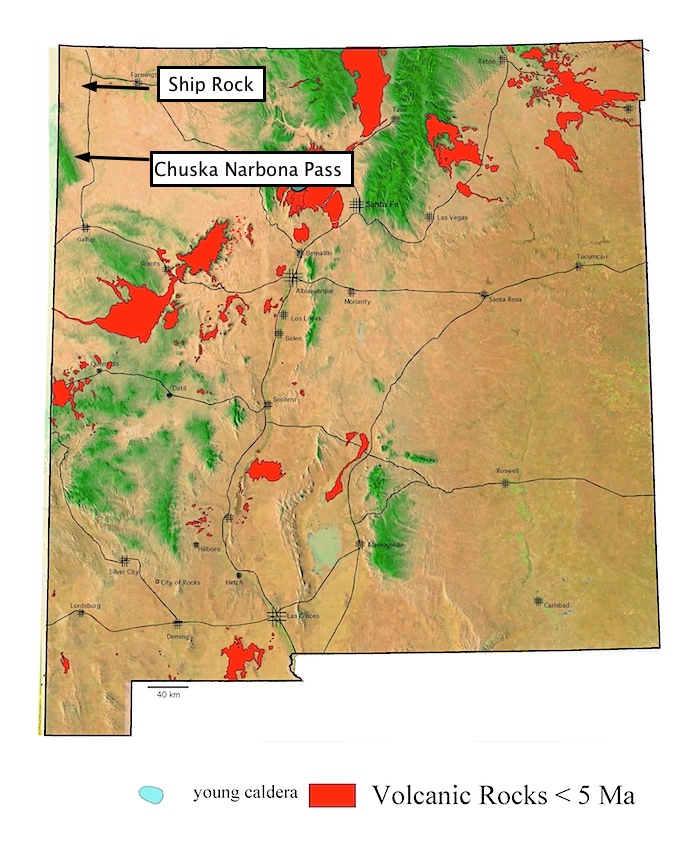 The Navajo (Dine) volcanic field extends from Gallup and Farmington, New Mexico to Window Rock, Arizona. It consists of the eroded remains of very old volcanoes that erupted around 30 million years ago. The best-known landform in the field is the volcanic neck, Ship Rock, the eroded roots of a very large volcano. The Chuska Mountains are the eroded surfaces of old explosive volcanoes. The rock types in this volcanic field are unusual in chemistry.

The Navajo volcanic field is a diffuse group of intrusions, dikes, and some extrusive rocks of early Neogene (mid-Cenozoic) age scattered between Gallup and Farmington, New Mexico and Window Rock, Arizona. The most famous intrusion is Ship Rock. Intrusive rocks in the Navajo volcanic field, like most of those elsewhere within Colorado Plateaus province, include some unusual ultramafic rocks such as minette, vogesite, and kimberlite as well as altered and serpentinized basaltic tuff and tuff breccia.

As a rule, these types of volcanic rocks are representative of magmas that derived from deep within the continental lithosphere and from a mantle source that is somewhat different in composition than "typical" mantle. For example, the rock called minette consists of alkali feldspar, biotite or phlogopite, and diopside. Diopside (which is a pyroxene), phlogopitic biotite and olivine all occur as phenocrysts (very large crystals) in many hand samples.

The Buell Park diatreme, which consists of kimberlite, is also part of the field. Kimberlite is the host rock for diamonds in many places in the world, because kimberlite is erupted from great depths where diamonds are initially formed. Both Buell Park and the Green Knobs are ultramafic breccias and consist mostly of serpentinized olivine and pyroxene.

Ship rock is thought to represent the near-surface interior of a maar-type (steam blast) eruption. It is an intrusive rock that is  called a volcanic neck. It is 500 m in diameter at its greatest width, and rises 600 m above the surrounding plains. It consists of tuff breccia and fractured and comminuted (broken up) host rocks with thin, sheet-like intrusions of minette, an unusual rock type, locally cutting through the entire mass. The intrusion is estimated to have been emplaced at a minimum depth of 750 and a maximum depth of 1000 m below the original surface. The surrounding host rocks at the current surface (current level of erosion) are late Cretaceous in age and of marine origin, and called the Mancos Shale. Six dikes radiate from a point just west of the central intrusion, the three largest are 9, 4, and 3 km in length and trend S12 degrees E, N80 degrees W, and N55 degrees E respectively. The other three dikes are approximately parallel to the northern dike, trend N55 degrees E, and are less than 1 km in length. Several small plugs occur along the length of some of these dikes. 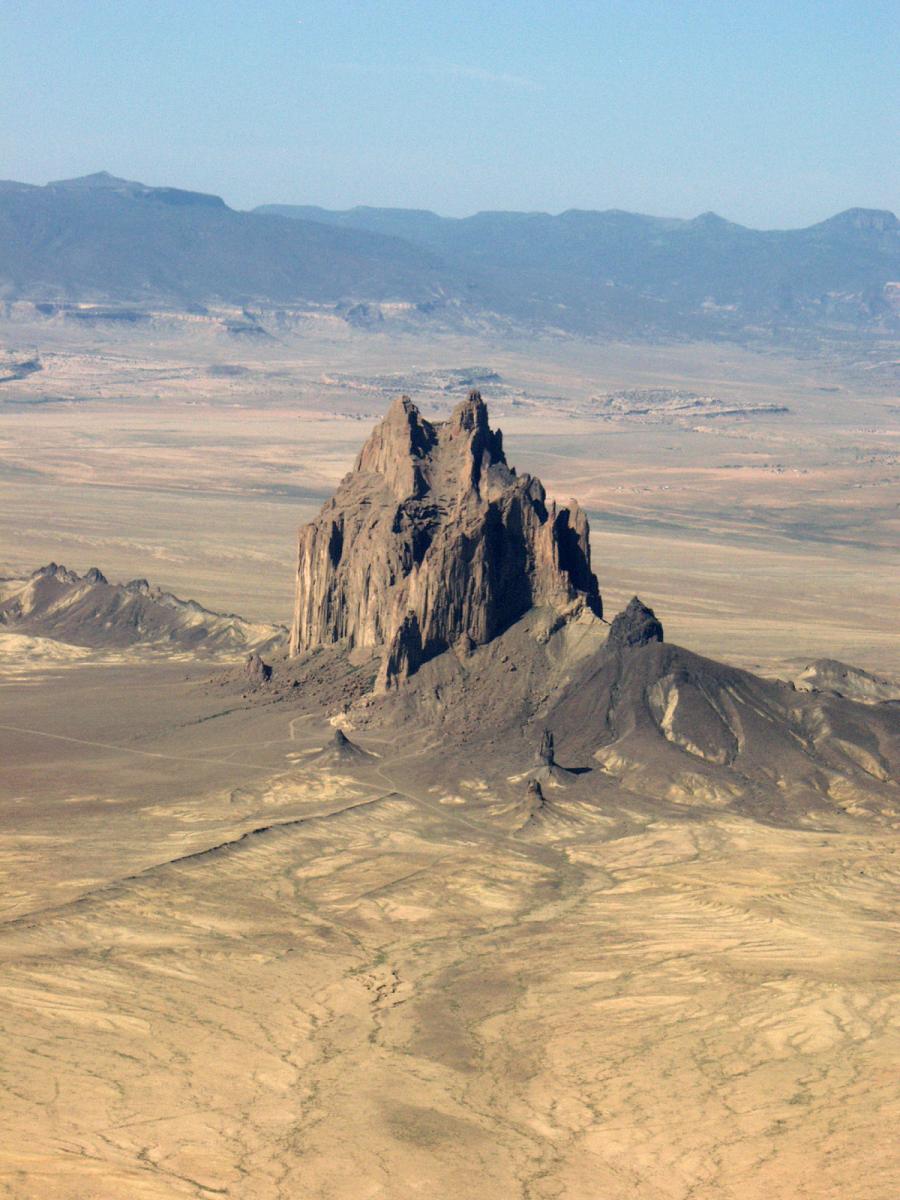 Ship Rock as seen from the air. In the background are the Chuska Mountains. Photo, L. Crumpler 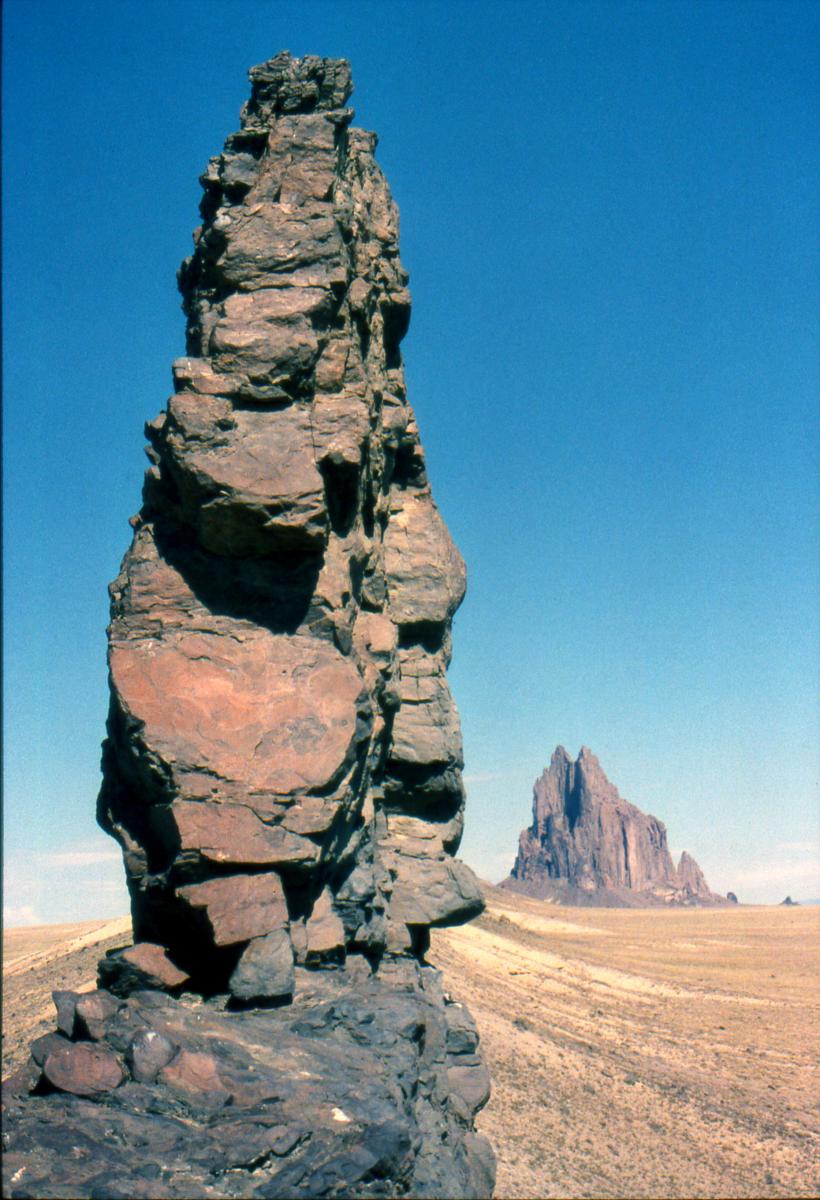 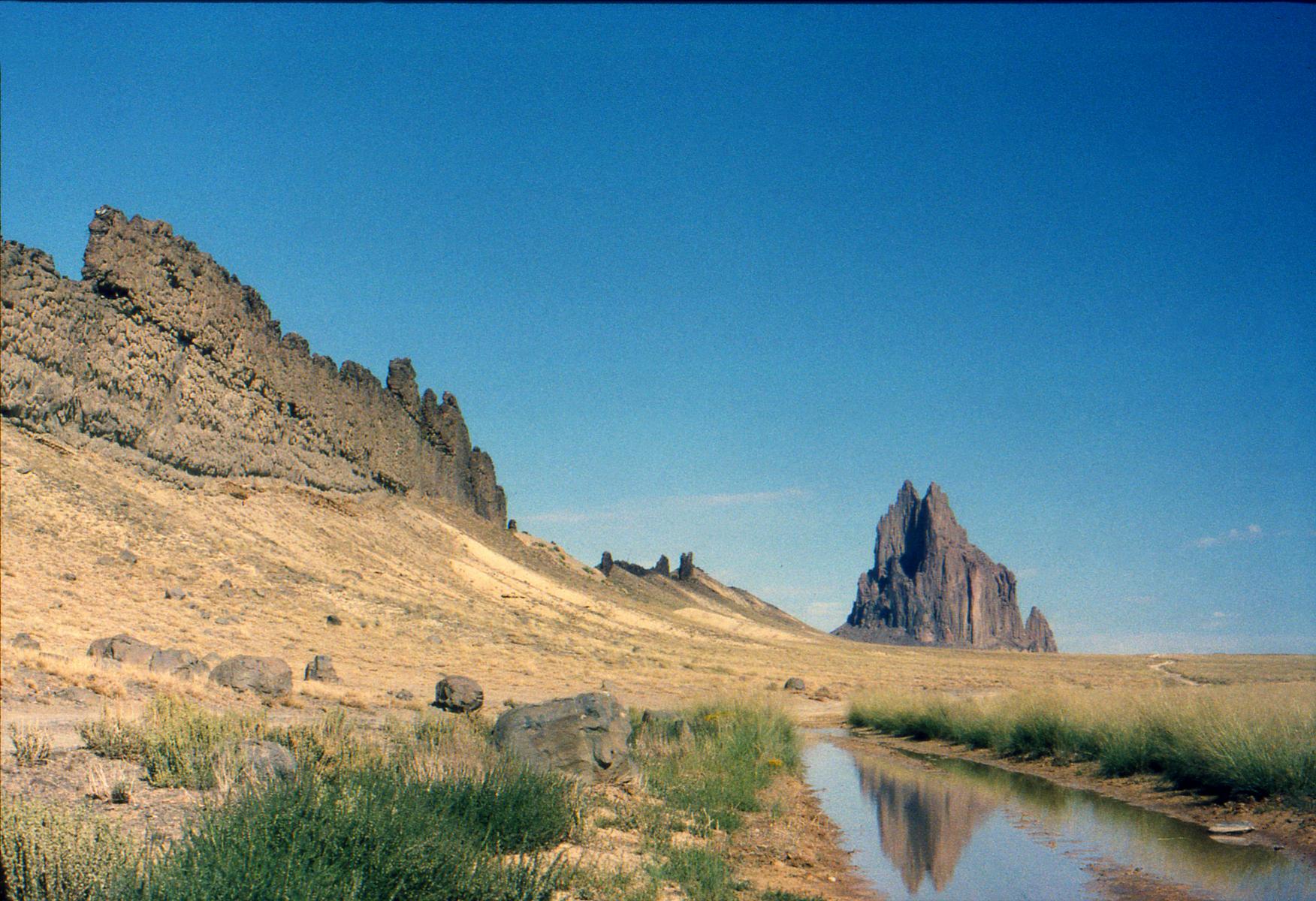 The northeast dike is actually segmented into 35 short dikes with intervening Mancos Shale. The dikes range from 0.6 to 4.6 m in width and 8 to 395 m long. Each dike segment is oriented somewhat differently from adjacent dike segments, and the pattern as a whole is not strictly en echélon. However, the trend of all the segments together is remarkably linear. This suggests that they are segmented from a larger dike that occurs at depth. The central intrusion appears not to have strongly disturbed local sedimentary strata, which are flat-lying adjacent to the intrusion. Considerable amounts of the host rock have, however, slumped into the throat of the intrusion along the margins. Locally the breccias consist of broken and fragmented sedimentary materials with rare fragments of minette and biotite mixed within the breccia. As is common with  many volcanic necks, the mixture of comminuted (broken and fragmented) sandy host material and juvenile material is so extreme in the breccias that it is often difficult to distinguish the difference between sedimentary and volcanic materials in a hand specimen.

Near the top and along some of the margins of Ship Rock there is distinct inward-slumping and inward-dipping stratification of the tuff breccia. This configuration is typical of the structure seen in the smaller and much younger Rio Puerco volcanic necks of the Mount Taylor Volcanic Field located farther east. Based on this, the current level of exposure of the volcano's roots is interpreted to be within several hundred meters below the original summit volcanic crater. Additional evidence is provided by the observed maximum thickness of the Tertiary-age Chuska Sandstone. In addition to sedimentary materials, some rounded cobbles of crystalline basement rocks occur within the tuff breccia. And some breccia bodies consist almost entirely of comminuted (fragmented) host rocks. Calcite and calcite veins are common throughout many of the breccia masses. All of this evidence confirms the interpretation that Ship Rock is a part of the volcano's roots that originally formed several hundred meters below the original volcanic edifice.

Note that Ship Rock is on the Navajo Nation and is considered sacred to the Navajos. Viewing is allowed; but it is off limits to hikers and climbers. 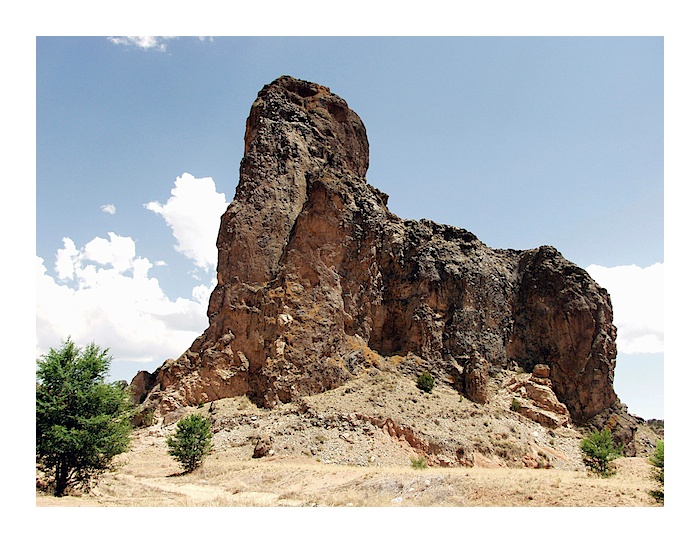 The Beast, an isolated intrusion, is typical of the scattered smaller volcanic intrusions throughout the Navajo Volcanic Field. 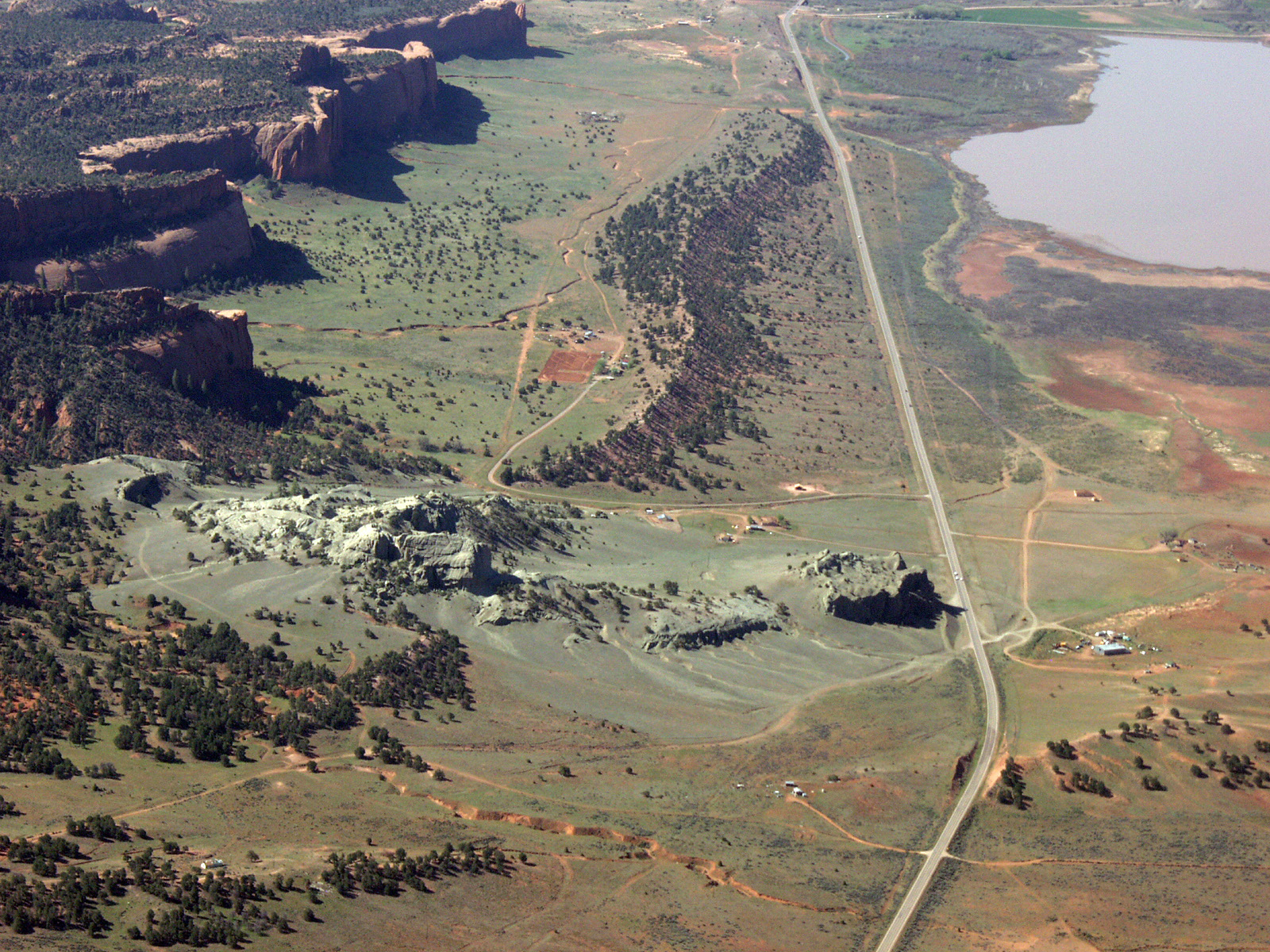 Another type of volcanic feature within the Navajo field are diatremes. A diatreme is the eroded root (subsurface features) of a very explosive steam-blast volcanism that erupted rocks from great depths. The diatremes named the Green Knobs in this photo are visible to the left of the curve in the road. They are green in color, due to mostly serpentinized olivine and pyroxene minerals within the rocks, and they stand out markedly from the surrounding sedimentary rocks as seen from the air. Photo, L. Crumpler

Outcrops on the Green Knobs are typical ultramafic granular materials that erode in pinnacles and towers. Photo L. Crumpler

The Narbona Pass (also “Washington Pass”) volcano, in the Chuska Mountains, is a little known example of the explosive vent structures that may have been common to many of the Navajo Volcanic Field volcanoes before they were eroded to their current deeper levels of exposure. The crater shape of Narbona is located on the upper surface of the broad mesa-like Chuska Mountains. This surface is some 300 to 400 m above the surface surrounding Ship Rock and similar intrusive structures of the Navajo field. Therefore, it is possible that Narbona is a preserved surface expression of the type of volcanism responsible for Ship Rock, and that Ship Rock is a deeper exposure of the conduit for a Narbona-type volcano. Narbona volcano itself must be considerably eroded given that it would be a surface remnant of early Neogene age. The crater shape could be a function of the erosion of a relatively easily removed former volcanic cone. More information is needed to understand this volcano. 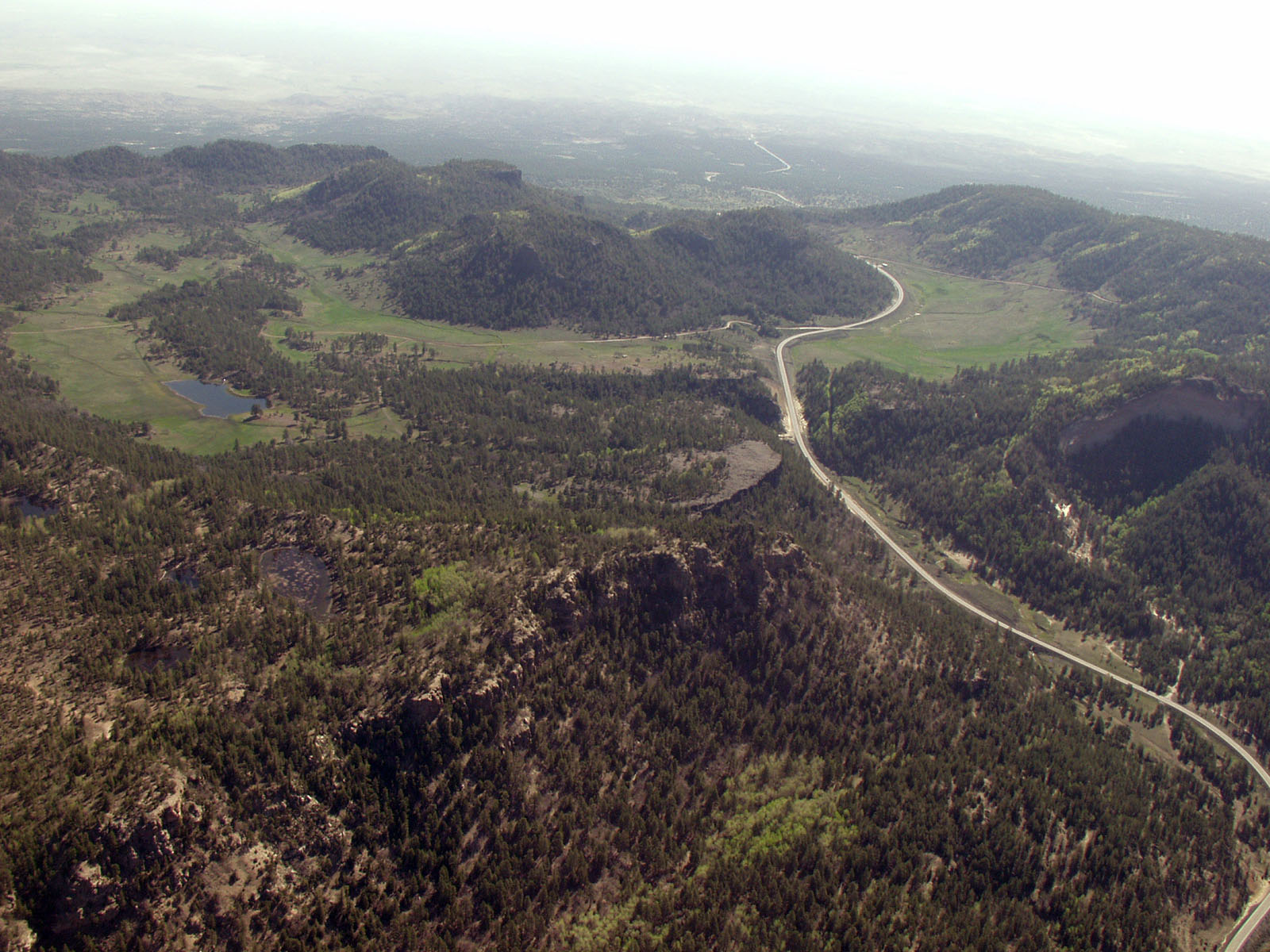 Narbona volcano as seen from the air. The view is to the east. Photo by L. Crumpler 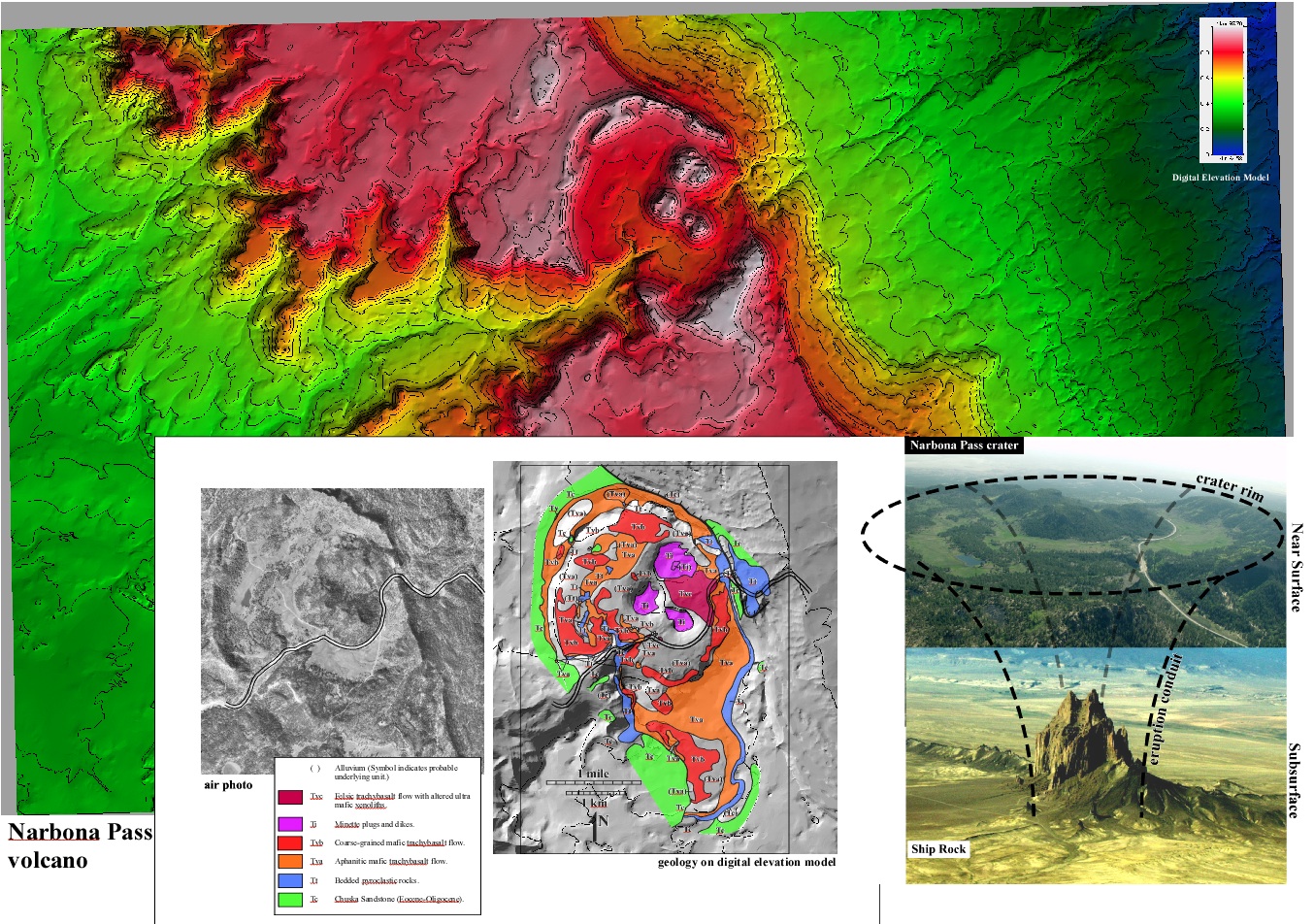 DEM and geologic map (re-drafted after Ehrenberg, 1978) of Narbona Pass crater. On the lower right is an interpretation (by L.Crumpler) of the possible relationship between the intrusive structure of  Ship Rock and the surface volcano morphology before erosion using Narbona Pass volcano as a model.