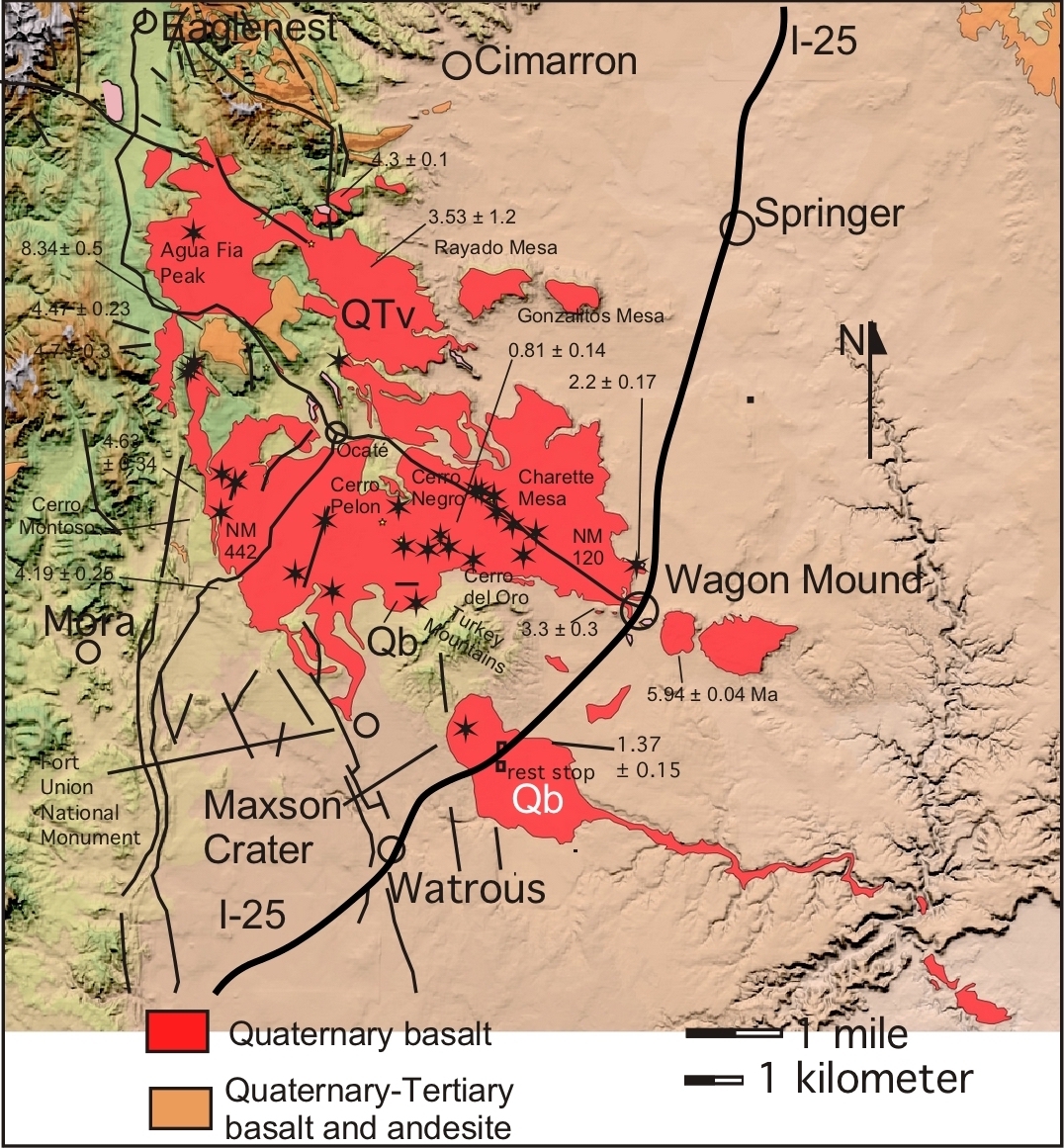 The Ocaté volcanic field (OVF) extends from Agua Fria Peak to Wagon Mound, NM. It consists of about 50 individual volcanoes, and associated lava flows, ranging in age from approximately 8 million years to 800,000 years old. Maxon Crater and Wagon Mound are two of the volcanic features of this field that are readily seen by travelers on I-25, although the travelers may not realize they are looking at volcanic eruptions. Those who ski at Angel Fire may not realize that they are just to the east of Agua Fria Peak, one of the westernmost of the Ocaté volcanoes. Agua Fria is a shield-type volcano; the same type that has built the Hawaiian Islands. Agua Fria erupted about 5 million years ago.

Volcanic fields differ from the more popular conception of volcanoes, like Hawaii or the large volcanoes of the Cascades. Instead of one big volcano, volcanic fields consist of clusters of many small volcanoes. Overall, they are all characterized by many small centers of eruption (one to a few kilometers across) of fundamentally basaltic, but ranging to more silicic, compositions. Thousands of years may occur between the eruption of each small volcano, but they all occur within the space of a hundred kilometers or so, and contain from several tens of vents to several hundred volcanic vents erupted over a period of several million years. At any one time during the field's active lifetime, this means that it probably looked much as it does today. Each volcano is characterized by low rates of magma eruption and consists mainly of cinders, spatters, and dark lava flows, although other types are present in many fields. In the OVF, many of the volcanoes are shield volcanoes, such as Aspen Hillm Apache Peak, Agua Fria Peak, and Maxon Crater; although there are also some intermidate-age composite or stratovolcanoes, such as Cerro Montoso.

The Ocaté volcanic field (OVF), sometimes called the Mora volcanic field, is located at the boundary between the Southern Rocky Mountains and the Great Plains physiographic provinces, and lies on the east flank of the Rio Grande rift. The field consists of at least 16 basaltic to dacitic lava flows and about 50 associated vents ranging in age from late Miocene to Pleistocene, 8.34±0.50 Ma to 0.81±0.14 Ma. Like the nearby Raton-Clayton Volcanic Field (RCVF), three major topographic levels of lava flows in the Ocaté field relate to three age groups. These are defined in part by a sequence of "inverted topographic valleys" in which the older eruptions are situated on earlier and now higher erosion surfaces, and subsequent eruptions were emplaced on younger, eroded lower surfaces and in modern drainages. The three volcanic eruption age groups are: (1) volcanism older than 5 Ma (million years), which includes flows capping mesas with surfaces around 3000 m in elevation and an apparent E-W fissure line of vents near Wagon Mound; (2) volcanism between 5-4 Ma, which includes most of the flows in the northern part of the field and around Agua Fria Peak as well as other shield volcanoes; and (3) volcanism younger than 4 Ma, which includes the most abundant flows in the OVF and volcanic vents (edifices) such as Cerrito Pelon, Cerro Negro, Cerro del Oro and Maxon Crater. The youngest flows in the field were erupted from the multiple Cerro del Oro scoria cone vents in the central part of Charette Mesa, northwest of Wagon Mound. The OVF is bounded by the southern part of the Cimarron Range of the Sangre de Cristo Mountains on the north, and extends to the general vicinity of Wagon Mound, NM.

The ridge called Wagon Mound consists of an elongate thick basaltic lava and tuff breccia section striking along a an apparent E-W fissure line that includes volcanic vents on Jarosa and Santa Clara Mesas west of I-25 amd Las Mesas del Conjelon, east of I-25. The calc-alkalic to tholeiitic basaltic flows have been dated at 5.9 Ma (million years). The Wagon Mound volcanic section once filled a valley, but it is now a mesa created by the erosion of the softer surrounding sedimentary rock.  Geologically, this is called "inverted topography."  Continued erosion has shaped Wagon Mound to resemble the profile of a conestoga wagon; and it was a prominent feature and trail marker for travelers along the Santa Fe Trail.

Agua Fria Peak is a shield-type volcano; the same type that has built the Hawaiian Islands. Shield volcanoes are built up slowly by lava flow after lava flow erupting in a radial pattern. The lava flows in and around Agua Fria Peak are intermediate in age, between 5 and 4 million years, and are olivine basalts.

Maxon crater is noticeable to travelers on I-25, between Watrous and Springer, as the site of a roadside rest area; but most travelers probably have no idea that they are driving across the flank of a large basaltic shield volcano; the same type of volcano that created the Hawaiian Islands. Maxon consists of a large cluster of scoria cones at the summit of this substantial shield volcano. Maxon is included in the youngest age group in the field, and has been dated at 1.4 million years old. Basaltic lava flows from Maxon crater flowed 90 km eastward down the canyon cut by the Mora River. Remnants of these flows occur 100 m below the rim of the canyon and 125 m above the present level of the river.

Cerrito Pelon volcanic center as seen from Fort Union National Monument. The soldiers who were assigned to Fort Union probably did not realize that they were surrounded by volcanoes and volcanic lava flows. Photo L. Crumpler 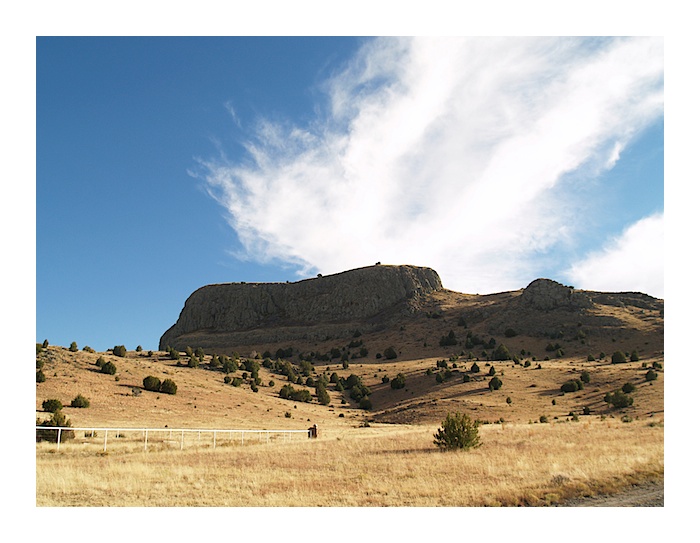 Wagon Mound viewed from the outskirts of the small town of the same name. The structure consists of an elongate thick basaltic lava and tuff breccia section striking along a local fissure line. Wagon Mound was named due to its shape resembling the profile of a conestoga wagon; it was a prominent feature and trail marker along the Santa Fe Trail. Photo L. Crumpler